How a card game contradicted all pessimistic statistics and raised 8,7 million of dollars on Kickstarter

It is probably not very motivating to create a crowdfunding campaign knowing the odds are against you. Numbers from last April, analysed by Statista, shows the success chances of a project funded on Kickstarter is as low as 37% and, by consequence, the probability of failing as high as 63%.

Those numbers, however, don’t mean as much to the cartoonist Matthew Inman, the creative director Shane Small and the ex-chief design officer at Xbox, Elan Lee. They are the creators of a game called “Exploding Kittens”, a major success phenomenon in crowdfunding. 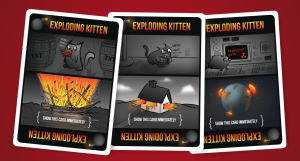 The card game involves strategy and funny characters, giving special powers to each player. The aim is to use whatever resource is available to avoid getting the “exploding kitten card”, which is hidden somewhere in the deck of cards. If a player draws from the pile a card with an explosive cat on it, “they die” and have to leave the game.

In 2015 the game idea was proposed on Kickstarter, aiming to collect 10’000 dollars. After 20 minutes the value was already achieved. But the support, and money given for the project, continued to grow. In two hours, they received 1’000% the initial goal, after seven hours 10’000% and in only two days the value collected was already 20’000% the initial request. The campaign finally finished after one month, when Exploding Kittens had received 8,782 millions of dollars, coming from almost 220 thousand investors –also called « backers ».

In a interview given to CNBC, Elan Lee, explained the idea came from seen his nephews “just staring at the TV, not talking and not laughing”. The aim of the card game was to provide an “old-fashioned experience” gathering people and allowing them to have fun together, rather than alone staring at “pixels on the screen.”

“Every card in the game is designed to make someone you’re playing with entertaining, they’re just mechanisms to unlock the entertainment value in the people you’re sitting down with”, said Lee.

In spite of been loved by its investors, the game was also criticized by cat lovers. In the same interview, the co-creator Matthew Inman says the game is actually “pro-cat”, since the kittens are “accidentally blowing themselves up”, and, therefore, the object of the game isn’t to get them to blow up but to save them. In any case, the company started contributing to animal causes and to sell cat collars that alert people if a cat has escaped.

How not to fail

Despite Exploding Kittens huge success, the elevated rate of failing projects in crowdfunding are still scary for the project developers that haven’t launched their idea yet. Mark Pecota, the CEO of Lauchboom and author of the book “Hacking Kickstarter 2.0” lists the top 3 reasons why a crowdfunding campaigns may be unsuccessful:

While there is a list of ‘basic rules’ to avoid main mistakes when asking for crowdfunding, there seems to exist as well a ‘basic recipe for success’ that is just as much possible to replicate. Following the same steps as their first time, the creators of Exploding Kittens came up with following crowdfunding hits: “Throw Throw Burrito”, that had $2,5 million given by backers and “Bears vs Babies”, with $3,2 million coming from crowdfunding campaigns.